What’s In This Book? 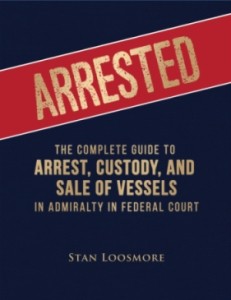 This book contains all that the practitioner needs to file, prosecute and complete a preferred marine mortgage or maritime lien foreclosure case in admiralty in United States District Court.

Eighteen of the chapters include figures that are forms of pleadings or documents. Every one of the figures is based directly on a pleading or document that was actually used in an actual federal vessel arrest case. The figures have blanks followed by numbers in brackets, such as: __________ [6].

Each chapter that has figures concludes with a list of notes and the numbered notes explain what is to be put into the numbered blanks in the figures in that chapter. Almost all of the figures are sufficiently complete that referring to the notes and filling in the blanks is all that will be required.

Your Purchase
Your cart is empty
Visit The Shop
Log In